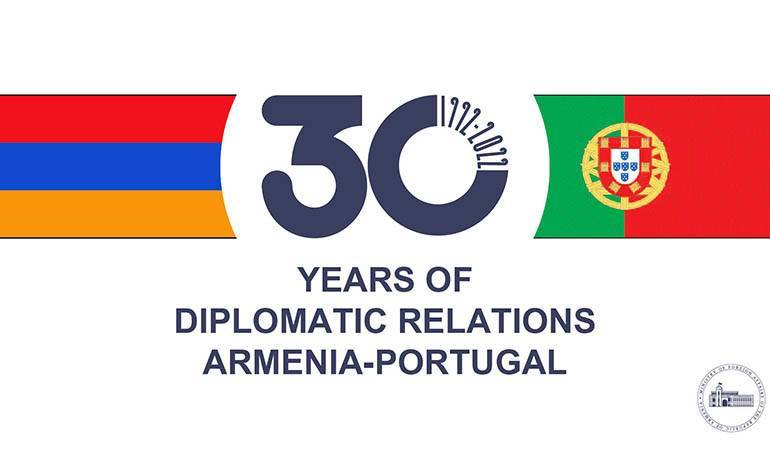 On May 25 Portugal and Armenia celebrate the 30th anniversary of the establishment of their diplomatic relations. This celebration takes place against the backdrop of the ongoing conflicts and tensions in the world and in particular, the Eurasian region. Therefore, Portugal and Armenia recognize with much appreciation the strong and long-lasting bonds of friendship and partnership that unite them.

Armenia and Portugal are genuine partners and share several priorities and common values. The two countries are parties to the Comprehensive and Enhanced Partnership Agreement signed in November 2017 among Armenia, European Union and its Members States and it is an encouraging coincidence that this celebration of the establishment of the diplomatic relations concurs with the dynamic process of the implementation of the roadmap of the Agreement.

On this occasion, Portugal and Armenia wish to reaffirm the commitment to further strengthen the interstate dialogue at the political, economic, and sectoral levels, as well as reinforce their interaction within the United Nations, OSCE, Council of Europe, and other multilateral fora of international and regional dimensions, within which both countries have registered strong and fruitful cooperation.

Portugal consistently supports Armenia within the framework of the Eastern Partnership program. In its turn, Armenia shows a keen interest in developing trade with Portugal and cooperation in the framework of academic and cultural exchanges, scientific research, tourism, high-tech, renewable energy, and other fields.

The spirit of friendship between the Portuguese and Armenian people, and in particular, the philanthropy power of the Calouste Gulbenkian Foundation stands as a symbol of solidarity and a bridge capable of further uniting two countries and peoples as well as other nations and cultures in the East and West.

Today, Armenia and Portugal have steadily developing interstate ties and aim at working even more closely with each other to identify the vast unrealized potential in their relations to be harnessed to the benefit of their citizens.