H.E. GAREN A. NAZARIAN
Ambassador Extraordinary and Plenipotentiary
of the Republic of Armenia 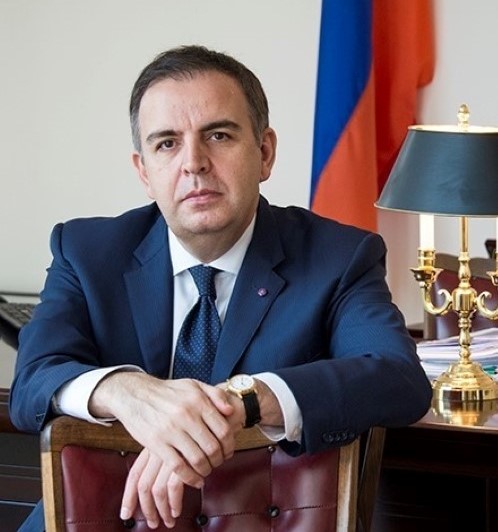 Garen Nazarian was appointed Ambassador of Armenia to the Holy See by the decree of the President of Republic Armen Sarkissian on December 28, 2018. and credentialed by Pope Francis on March 9, 2018. Since July 2019 Nazarian is Ambassador of Armenia to the Sovereign Order of Malta and since August to the Portuguese Republic with residence in Rome.

Ambassador Nazarian was Deputy Foreign Minister of the Republic of Armenia from (2014-2018). He was the Chief Armenian Negotiator for the Comprehensive and Enhanced Partnership Agreement with the European Union (2015-2017) and co-chaired the Global Forum against the Crime of Genocide held in Yerevan in 2015 and 2016.

In 2009, Mr. Garen Nazarian was appointed Permanent Representative of the Republic of Armenia to the United Nations in New York. During his tenure at the UN headquarters he was elected the Chair of the UN Commission on the Status of Women for years 2009-2011 and from 2012-2013 served as the Chair of the UN Special Committee on the Charter and Strengthening of the Role of the Organization.

Prior to his assigment to New York, in 2005-2009, Mr. Nazarian was Armenia’s Ambassador to the Islamic Republic of Iran and Adviser to the Minister for Foreign Affairs in 2002-2005, during which period he was also a member of the United States-Armenia Task Force (USATF).

From 1996 to 2002, Ambassador Nazarian served as the Permanent Representative of Armenia to the United Nations and other International Organizations in Geneva. He traveled to Durban (South Africa) in 2001 as the Vice-President of the World Conference against Racism, Racial Discrimination, Xenophobia and Related Intolerance and, in 2002, was elected to the post of the Chairperson of the 8th Meeting of the State Parties to the UN Convention against Torture.

Mr. Nazarian joined the Ministry of Foreign Affairs in 1991. He graduated from the Department of the Oriental Studies from the Yerevan State University and later earned his Master’s degree in Foreign Policy Studies from the Diplomatic Academy of Moscow.

In 2011, 2015 and 2017 he was endowed with state medals of “Mkhitar Gosh”, “The Medal of Services to the Motherland” and the “Medal of Honor” of the National Assembly of Armenia respectively. On March 13, 2021 Pope Francis awarded Ambassador Nazarian with a Knight’s Grand Cross Order of Piux IX.