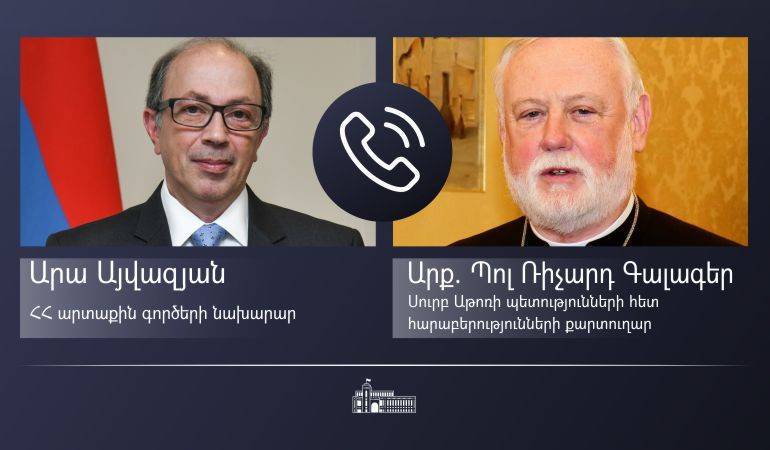 On March 31, Minister of Foreign Affairs of Amenia Ara Aivazian held a phone conversation with Archbishop Paul Richard Gallagher, the Secretary for Relations with States of the Holy See.

The Foreign Minister reiterated Armenia's readiness to further deepen and strengthen relations with the Holy See based on historical and universal values. They exchanged views on the steps to be undertaken for the close dialogue and strengthening the dynamics of high-level contacts.

The interlocutors also touched upon the issues of regional security and stability. The Foreign Minister of Armenia highlighted the importance of the calls of Pope Francis to end the hostilities and establish peace in the post-war period.

The Foreign Minister of Armenia also presented to the Secretary for Relations with the States the steps towards addressing humanitarian issues following the Turkish-Azerbaijani aggression. As an issue requiring an immediate solution, the Minister stressed the safe repatriation of the Armenian prisoners of war held in the Azerbaijani captivity.

Emphasizing the urgency of preserving the Armenian cultural and religious heritage in the territories under the Azerbaijani control, Minister Aivazian strongly condemned the policy of deliberate desecration and destruction of Christian cultural values by the Azerbaijani authorities. In this regard, the sides underscored the importance of active intervention of the international community.